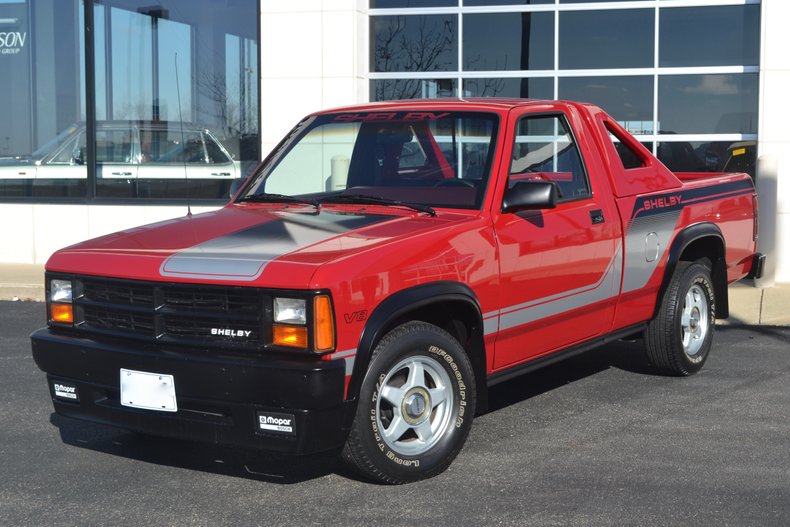 Offered in 1989 only as a limited-production high performance variant of the Dodge Dakota Sport mid-size pickup, this was the first rear-wheel drive product to come out of Shelby workshop since partnering with Chrysler Corporation.

Like many Shelby products that had preceded the Dakota, the drivetrain received a plethora of upgrades. Gone was the 3.9L V6 of the more mundane pick-ups and instead a 5.2 liter overhead valve V-8 was shoe-horned under the hood. Due to the limited space available, the engine driven fan mounted on the front of the motor had to be removed in favor of electric fans, with a beneficial side effect of an added 5 horsepower. The total output was an impressive for the day 175 horsepower and 270 ft-lbs of torque, just about a 70% increase over the stock V6. The pick up also received a limited slip differential, transmission cooler, 15-spoke hollow alloy wheels, and a slew of body mods including a unique air dam and bumpers. For what started life as a utility vehicle, a zero to sixty time of 8.5 seconds was an impressive figure for 1989, and only Dodge's previous performance truck, the Li'l Red Express, offered this level of performance in such a rugged package.

One could order the truck in any color as long as it was either red or white, and production was extremely limited with only 1,500 of these Shelbys to roll out of the factory in its single year of production. The Dakota proved popular enough to be the first in a wave of new performance oriented utility vehicles with the GMC Syclone and Ford Lightning soon following just a few years later.

This Dakota received a thorough restoration courtesy of its previous owner, Dallas Rice(original owner of truck), who specializes in refurbishing MOPARs. Dallas Sold the Shelby truck in August of 2012 to its second owner, and the vehicle has remained in excellent condition since. Both the exterior and interior present incredibly well, and this is just one of 995 examples finished in red.